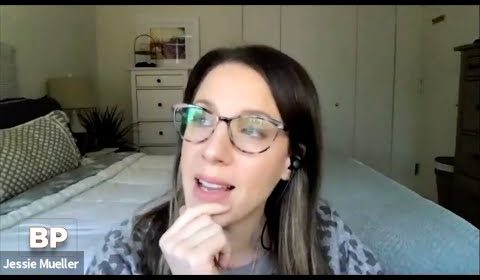 Before it airs nationwide, we’re offering a look at the newest episode of BROADWAY PROFILES. Hosted by Emmy-winning anchor Tamsen Fadal and powered by Broadway.com, this installment will air in New York City on February 7 at 6PM ET on WPIX. Be on the lookout for BROADWAY PROFILES, the only nationally syndicated weekly theater news program, on your local TV station.

Featured this month:
– Tony winner and TV star Jane Krakowski discusses what it’s like taking on hosting duties for Fox’s gameshow reboot of NAME THAT TUNE and what fans can expect from season two of DICKINSON.
– Tony winner Jessie Mueller uses her voice to raise awareness for the Costume Industry Coalition and the multitude of behind-the-scenes independent businesses of Broadway affected by the shutdown.
– Mentalist Jason Suran finds a rewarding way to bring people together in his new Zoom show RECONNECTED.
– Disney’s THE LION KING star Bradley Gibson talks about what it takes to step into the character of Simba and his pre-show mantra.
– AIN’T TOO PROUD – THE LIFE AND TIMES OF THE TEMPTATIONS cast member Christian Thompson shares how to prepare oneself when your dreams become a reality.
– Inspired by late Broadway performer Nick Cordero, BEETLEJUICE actor David Josefsberg finds purpose during these uncertain times with his new venture Broadway Breathwork.

To find out where BROADWAY PROFILES WITH TAMSEN FADAL airs nationally, head to https://www.broadwayprofiles.com/.