“Who will love me as I am?” is the plaintive song of the beautiful, talented, kind, but tragically conjoined twins, Daisy (Gab Pangilinan) and Violet Hilton (Kayla Rivera).

“Side Show” is the latest masterpiece of Philippine theatrical juggernaut, Atlantis Theatrical Entertainment Group. Based on the life story of the conjoined twins who were stars of the popular freak show, a.k.a. side show circuit of the 1930’s in the U.S., this musical is extremely close to my heart. I have been a fan of the film, “Freaks,”by Tod Browning, in which Daisy and Violet featured prominently.

Tod Browning was a well known director of the horror genre of his era, For “Freaks,” he had wanted to bank on the shock value of featuring actors with real deformities, as opposed to just using make up and prosthetics. This tactic was also used by the producers of “American Horror Story: Freakshow” (which is an open homage to Freaks), however, to great success, unlike its muse and predecessor. The film that was considered too horrendous for its time, and got banned in several countries, for several decades, ruined Browning’s career. This was heartbreaking for me to learn, for the side show acts who were in the film must have been so disappointed, and hurt to be found too disgusting, for viewing in the film, of which they must have been so proud. Being familiar with the life story of the twins, as well as those of the other differently abled circus performers featured in the film (one of them was presented as a character in “Side Show”), it was a sublime treat for me to enjoy this work, based on their journey. There was some artistic license taken, regarding the true nature of the romantic aspects of the twins’ lives, and some characters created for more theatrical impact, Yet, the musical effectively, conveyed the tragedy of conjoined twins, forever doomed to be part of an unwitting, permanent duo.

The theme of outcasts just wanting to be treated like everyone else affects me very much, for I truly empathize with those who long to be accepted, loved, and lead normal lives, but have circumstances forced upon them, to forever render them outsiders. Typical of Atlantis productions, the set design, reminiscent of James Whale’s set of “Frankenstein”, was truly magnificent…rustic and dreary, yet lending itself to minor tweaks, to indicate changes of location, as the story progressed. 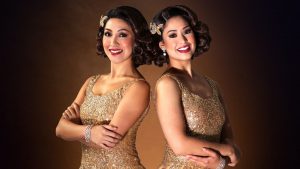 As required, lighting effects created the illusion that the audience was indeed inside a circus big top, and quickly drew the audience in, even from before the curtain was actually raised. Technicals were perfection the use of very simple stagecraft techniques using scrims, what resembled actual footage of a famed escapologist of the era, and impeccably designed and staged lighting effects were quite breathtaking. The instrumentalists played amazingly, as well…clean and polished as a CD, but with the robust, effectiveness that only skilled, live musicians can convey.

The two lovely actresses portraying the twins were absolutely endearing and believable. You literally fell in love with them at first sight. One can only imagine how difficult it must have been, to learn some tricky, and even highly energetic dance numbers, while literally joined at the hip. It was interesting to me, though, that during the saucier dance numbers, the twin who had longed to marry, and lead a homey life, was the one more seductive and sensual onstage. I took this portrayal to mean that, though she was the more reserved twin in normal life, onstage, she took on a different persona…much like the late, great Michael Jackson, who seemed so shy, and self-effacing, in interviews, but was a true show man when he cut loose, onstage. 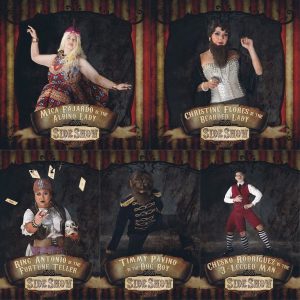 The performances were most impressive…clean, and on the mark. I commend the production for their admirable casting skills. The leading man, Markki Stroem possessed the proper demeanor, looks, and body language, as portrayed in movies from the musical’s time frame. In one fantasy sequence, he even reminded me of my most favorite actor of all time, Fredric March (in my opinion, the greatest “Jekyll and Hyde” of all time. Period.) as his partner wore a stunning gown reminiscent of Mr. March’s leading lady, Norma Shearer, in another favorite film of mine, “Death Takes a Holiday.” I wish I could convey how high such praise is, from me, for Mr. March, for his versatility and talent, is the love of my afterlife.

One character that truly captured my imagination, was Jake, the truest friend to the twins, as portrayed by Arman Ferrer, fresh from his recent triumph in “Binondo.” His voice is truly a thing of beauty, and the sincerity and intensity of his emotions are truly a wonder to witness. Being fortunate enough to speak to him after “Side Show,” as when I first met him after “Binondo,” I told him he broke my heart again…exquisitely so. The character Jake, and his affection for one of the twins, lightly touches on how interracial relationships were horribly frowned upon, in the 30’s. They were even illegal. This brought yet another layer of sadness and impossibility to the twins’ already tragic circumstances. It was interesting to me, though, that though Jake was referred to in the script as a colored man, Mr. Ferrer’s skin was not darkened accordingly, but he did sport a tattoo on his face. My companion and I joked that he was colored, I.e. as with a crayon, on his face, but then I realized, maybe this facial accoutrement was a play on the word “colored,” as the show featured many lines that were clever comebacks and a play on words. 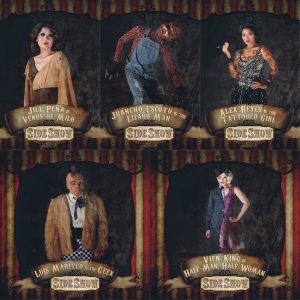 Another great favorite of mine was Ring Antonio in a dual role, as the Fortune Teller, as well as another pivotal role in the twins’ life. Her rich, mezzo/alto voice, and versatility as an actress truly impressed me. She has such a warm, genuine endearing quality, that somehow showed through each of her portrayals within the show, and her flawless English accent impressed me, as not many actors are able to adopt foreign accents so naturally and effortlessly.

The ensemble pieces were precise and crisp, and the period costumes were all beautifully executed. I truly admired the ensemble for they were subjected to several extremely quick changes.

Kudos to the costume designers and creators, for creating masks and costumes that were as effective as prosthetics, but no doubt, easy to remove and don, with the greatest of ease.

The music was of the usual musical genre, but I loved the big band jazz inflected numbers, as the latter was the popular music at the time. I enjoyed the dance numbers, especially those that included snippets of the Charleston, the popular dance step of that era. I was thrilled to see the actual poster of the movie, “Freaks,” being used as a prop in the musical. Truly, if ever there was a “Freaks” fanatic, it is I.

Towards the end, the story takes, what the creators must have deemed a more Hollywood or Broadway turn, for dramatic effect, instead of the true experiences of the twins, at this part of their life, but I understood the necessity of this, to build up to what most may deem a more interesting ending…the twins’ having to accept their situation…that they are who they are, and how the world will always see them. 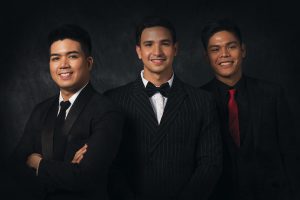 Their “I Will Never Leave You,” the bittersweet, also recurring counterpoint, to their “Who Will Love Me, As I Am.” The excruciatingly tragic tale of these lovely twins and their side show fellows truly resonated with me. The most externally abnormal turn out, internally, to be the most normal of all. It is normal for anyone, no matter how different, to long for love, and acceptance, but it is not always to be. Bravo, Atlantis!