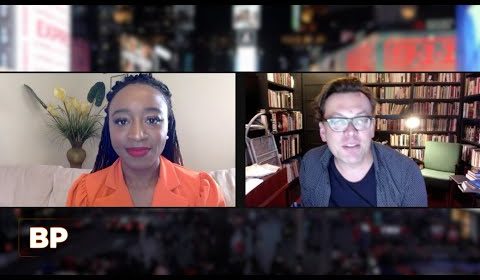 Before it airs nationwide next month, we’re offering a sneak peek at the newest episode of Broadway Profiles. Hosted by PIX11’s Emmy-winning anchor Tamsen Fadal and powered by Broadway.com, the November episode will air in New York City on November 1 at 6PM ET on WPIX and throughout the month across the country. Be on the lookout for BROADWAY PROFILES, the only nationally syndicated theater news program, on your local TV station.

– Get the latest on the 2020 Tony Awards. We hear from many of this year’s nominated stars, including MOULIN ROUGE! set designer Dereck McLane, JAGGED LITTLE PILL’s Elizabeth Stanley and TINA: THE TINA TURNER MUSICAL’s Daniel J. Watts.
– Ashley Park was nominated for a Tony for MEAN GIRLS in 2019. Now, she’s bringing her Broadway experience to Netflix in EMILY IN PARIS. Broadway.com Editor-in-Chief Paul Wontorek chats with her about starring in one of this season’s most binge-able shows.
– The highly anticipated film adaptation of THE PROM debuts on Netflix in just a few weeks. Directed by Ryan Murphy, the movie is adapted from the 2018 Broadway musical of the same name and features a star-studded cast, including Meryl Streep, Nicole Kidman, Kerry Washington, Keegan-Michael Key and James Corden.
– We sit down with two-time Tony nominee Laura Osnes, who is starring in the new Hallmark Christmas movie, ONE ROYAL HOLIDAY.
– While the Broadway shutdowns will continue through next year, BLINDNESS brings a taste of live performance back to New York City. Hear about what to expect in the show and how it is a much-needed step toward normalcy.
– November’s Fresh Face is Ricky Rojas, one of Broadway’s fastest-rising stars. He talks about his role as Santiago in MOULIN ROUGE!
– Broadway.com Editor-in-Chief Paul Wontorek sits down with author and journalist and author Michael Riedel to talk about his new book, SINGULAR SENSATION: THE TRIUMP OF BROADWAY.
– Catch an exclusive performance of a number from WAITRESS by Katharine McPhee.
– TWELFTH NIGHT: WELCOME TO OUR TABLE is an immersive and interactive take on Shakespeare’s classic comedy. Hear from the show’s co-director, Victoria Rae Sook, founder and artistic director of Food of Love Theater Company, and several of the stars.