The Book of Mormon: Religious Parody 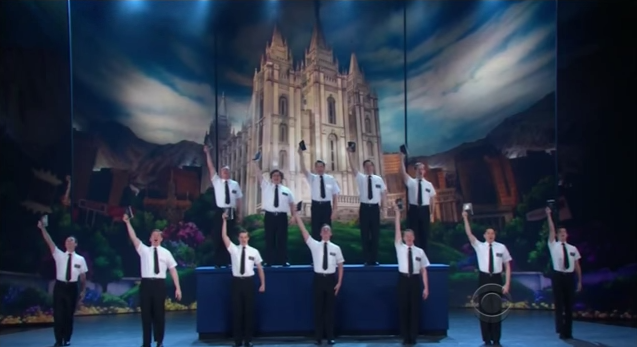 The moment it was announced that The Book of Mormon is spearheaded by Matt Stone and Trey Parker, their reputation set the expectations for this musical. The fact that they are joined by Robert Lopez served as the ultimate icing on the cake. 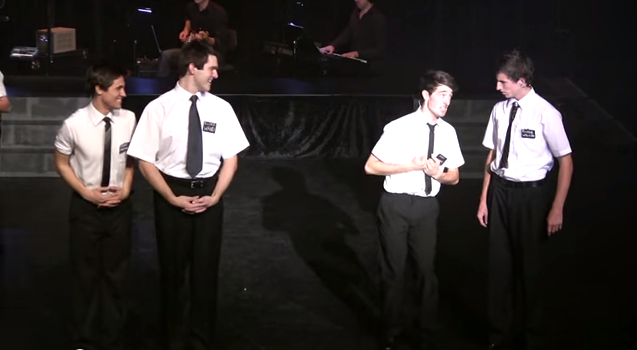 Why such expectations? Well, most of the fans that got excited were fans of South Park. Stone and Parker are the brains behind the controversial hit TV series South Park. South Park is known for poking fun at everything including religion. Robert Lopez is often credited for Avenue Q. Avenue Q is credited for giving a raunchy spin to puppetry. The next thing fans had to worry about is whether their humor would transcend to a musical theater production such as The Book of Mormon.

To say that the creators revealed their perception of Mormon missionaries through characters in The Book of Mormon they created is good. But more like parodying a religious organization. It was evident early on in the song “Turn If Off”.

Addressing the question about homosexuality in religious organizations is common. Because it will always come up anyway. Even in real life. So getting this issue tackled in a light-hearted manner in The Book of Mormon gets a renewed sense of discussion. That’s when you realize the importance of parody in the performing arts. It makes even the most sensitive topics brought to light. It loosens up the discussion as well since there is humor infused in the performance.

“Being gay is bad but lying is worse” – the beauty in the lyrics is in the irony of all. If you are checking some tidbits about The Book of Mormon, chances are you have stumbled upon this episode from South Park. It tackled the origins of The Church of Latter Day Saints founded by Joseph Smith. He made a cameo in the musical. This is how the production presented how the missionaries are just parroting the words of Smith. That slice of info was mentioned in the opening song “Hello”.

The song “All American Prophet” emphasized the Americanization of an originally Abrahamic religion. With Joseph Smith’s words as the peg for preaching, the main conflict in the story is how Elder Price and Elder Cunningham would preach The Book of Mormon to the people of Uganda. They only realized the level of difficulty of preaching the word here upon learning their first Ugandan phrase “Hasa Diga Eebowai”. It revealed their notions of God and superstition. Elder Price commented “That’s horrible!” And the local just replied “I know”. It sounds like resignation to their fate with their only consolation as cussing the God that they know of.

How common is it in Uganda to have AIDS as presented in The Book of Mormon? Price and Cunningham are talking to someone telling them “If ever you lay your hand on her, I will give you my AIDS!” Yikes! If his enumeration of people in the community having AIDS is not yet demotivating for the missionaries, getting direct at how their newest acquaintance is afflicted with AIDS might really get them thinking about the situation.

The clash between American proselytization and African superstition and culture was one of the sources of humor in The Book of Mormon. The creative crew behind this hit musical may have relied on just parodying the missionaries themselves. It presented interesting commentary on how religion affected their critical thinking. But of course, they are missionaries. So presenting them on the job itself to “test their faith” is a good route to provide a compelling story. Parody may be the goal. But in the middle of the humor, there should be truth. In this manner, The Book of Mormon succeeded in promoting critical thinking through song-and-dance numbers.

Subscribe to our online newsletter as well. You end up discovering more hit musicals to discuss by receiving the latest articles straight to your inbox. Like our official Facebook page, Musicals Online, and follow us on Twitter @musicalsnews. Thanks for reading. Much appreciated.