Jersey Boys in Manila: Oh What A Night! 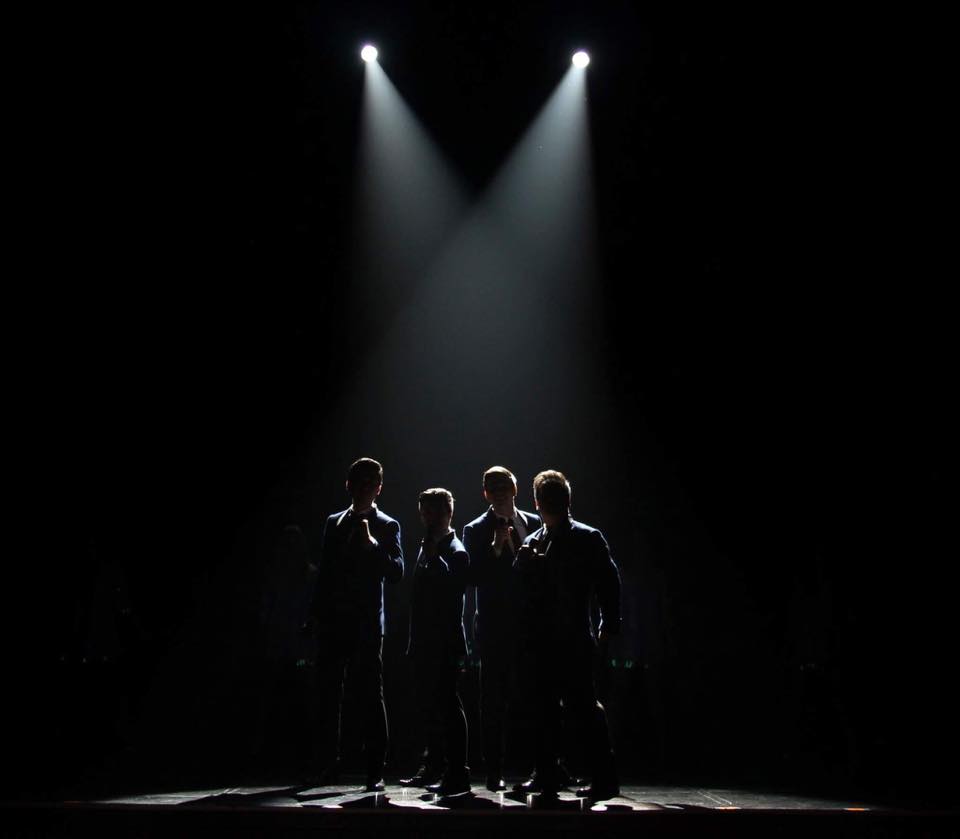 [Jersey Boys in Manila Featured Image taken from ATEG’s Facebook Page.] Jersey Boys in Manila was an event I looked forward to attending. And this was before the Manila cast was officially announced. Perhaps because prior to seeing it. I already saw the film version directed by Clint Eastwood. The moment the cast was finalized and announced. I made a point to watch it. 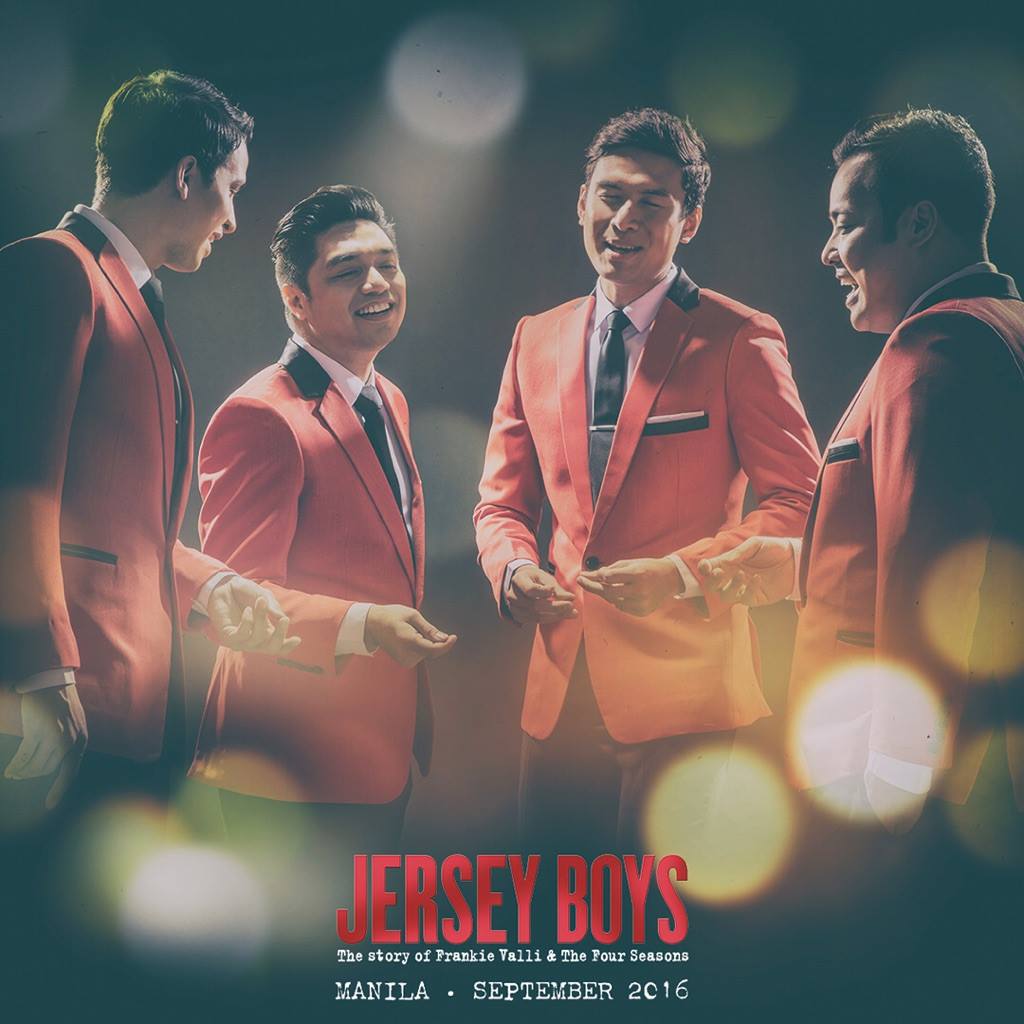 Expectations? Sure. I was there for the music. Because it’s still much better seeing Jersey Boys live than on my laptop. Then again I also knew how relatable the story has gotten. In a time when paparazzi was not even a concept. And there is no media underbelly dedicated to mudslinging celebrities in the service of clickbait articles. Jersey Boys in Manila presented how a group of street punks evolved into a musical sensation.

It started as a band with its initial members. Tommy DeVito plus his brother, Nick, and his protege, Frankie. They occasionally moonlighted into what Frankie called later “B and E.” That’s “breaking and entering.” In between felonies, they, along with Nick Massi, tried to put up a band and make it big in the music industry. While Tommy would take most of the credit in the band’s success. Frankie became the heart-and-soul of the group.

It was this fact that encouraged the young Bob Gaudio to take a second look at Frankie. He may be the name-dropping type of music nerd just to prove his point as seen on Jersey Boys in Manila. But he pointed out how Frankie would tweak a song and make it his own. At the risk of a rough start in his entry to the band. Bob immediately exercised his authority and independent thinking. It’s the kind of attitude that would irk Tommy. But Frankie had his way. And all Nick could do is agree. 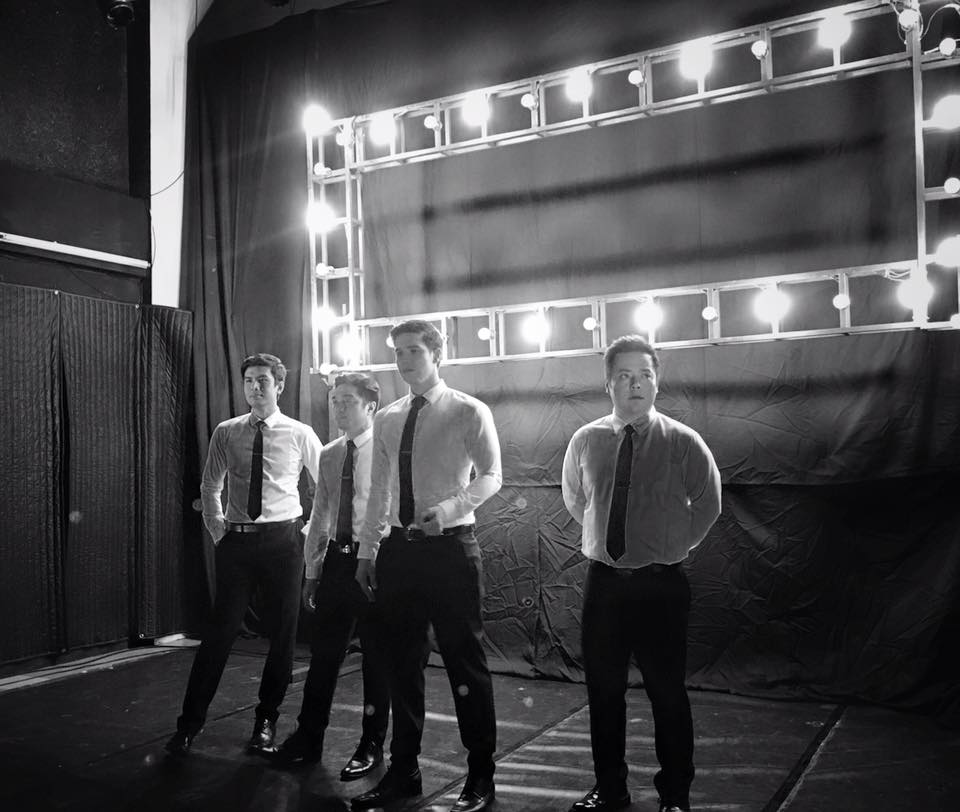 That’s when you realize that the plot presented in Jersey Boys in Manila is mostly about a clash of egos on their way to stardom. You have Tommy. The prick that everyone tolerates because everyone still benefits from his skills. You have Frankie. The young lad that evolved into a confident decision-maker due to the bargaining power his talent gave him. And you have Bob. The musical genius that discovered the business potential of his talent. (Nick had an ego too. But it took awhile in the story to take hold.)

Ego is not always a bad thing. Especially when you have any ounce of idea of the value brought to the table. Jersey Boys in Manila presented a dynamic character development in Frankie Valli. From a greenhorn that simply obeyed Tommy. To one that threw his weight around in a good way to save the group in a way he viewed best. It helped secure the rare talent that Bob had. And it helped save almost everyone from worse situations. Thanks to Tommy.

It’s also presented positively in Jersey Boys in Manila when it came to Bob. It rubbed off the wrong way with Tommy. Sure. But it helped once he negotiated sanely but sternly. It was the same sane/stern approach he used to record producer Bob Crewe. It was when he realized how the latter short-changed the band. It was also a pivotal character trait used to get his potential hit off the ground. Had he not been stubborn enough, the world would be deprived of a ground-breaking hit. 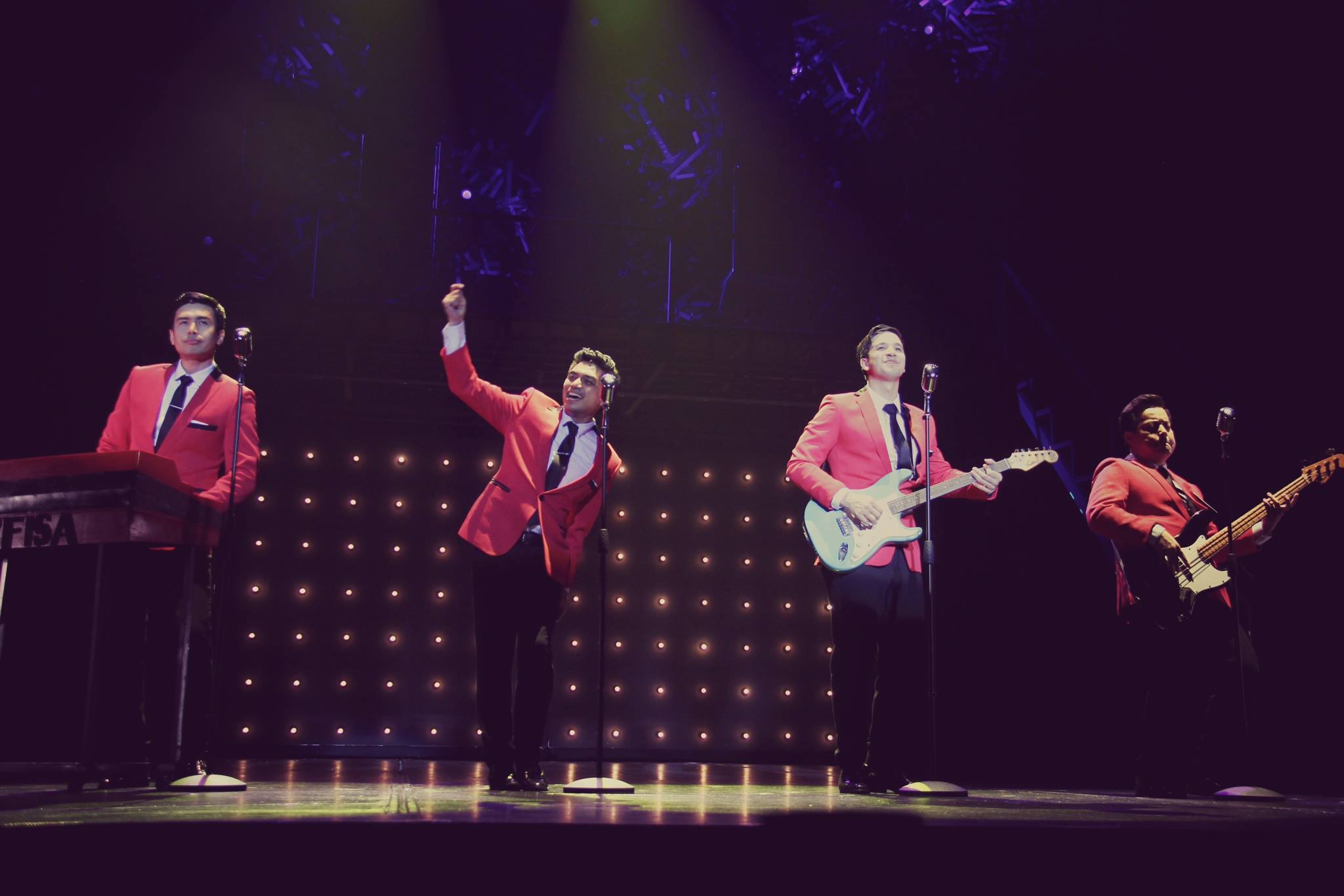 Now, presenting the pitfalls of ego. All you have to do as a viewer is watch how consistent Tommy is throughout the story. He may have “nice” moments. But you can tell that he “needed” to be nice. You can easily spot scenes where his dickhead antics are not tolerated. Jersey Boys in Manila was honest in stating that Tommy made a lot of things happen in the story.

Of course, he did. He’s one of the main sources of conflict in the musical. Everything else is reduced to a half-forgettable subplot the moment you compare them to his antics. The B and E. The gambling. The series of bad financial decisions. The way he practically pushed Frankie into a guilt trip to alleviate himself of all his debts. Everyone else’s faults only got highlighted once he’s temporarily plucked out from Jersey Boys in Manila story-wise. (Well, you have to find that out for yourself.)

With issues like these, you realize how the line “All this shall pass.” helps a lot. Before “reinvention” even became a thing in the music industry. Bob already thought of launching Frankie as a solo artist. I just had to disagree with Bob’s quip about how the Four Seasons was holding Frankie’s talent back. Frankie had to be in Four Seasons for Bob’s music to go off the charts. It took awhile for Bob to admit that he’d rather have Frankie perform solo onstage though. You soon realize how Bob used this to fulfill his promise to Frankie earlier at Jersey Boys in Manila.

Now that we have skipped some spoilers. How did the chosen Jersey Boys in Manila perform? Let’s analyze them chronologically. 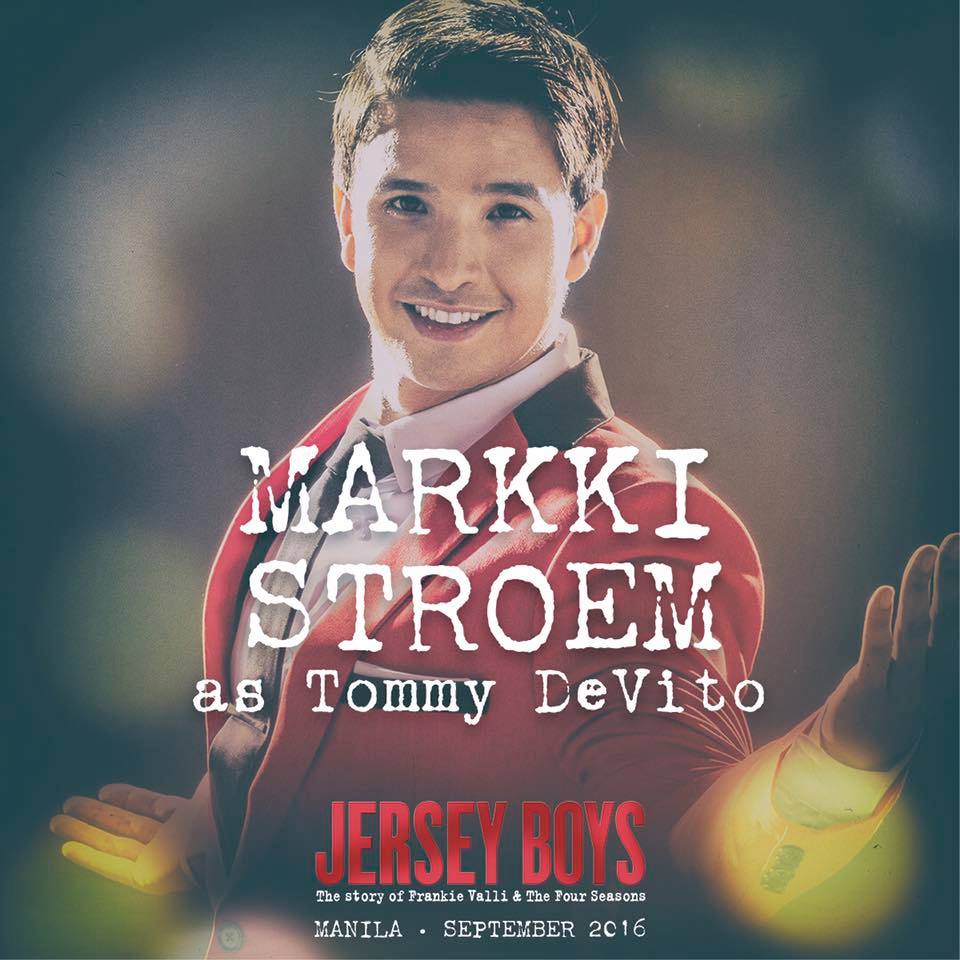 I was one of the fans that reacted neutrally when I first learned that Markki Stroem will be playing the role of Tommy DeVito at Jersey Boys in Manila. I’ve seen him play a bad guy in some indie flicks like Hermano Puli. As a narrator for his part, he is very engaging. He’s very effective at capturing the audience’s attention as a character. This is pointed out well whenever he’s stressing out how none of these events would have been possible without him. He succeeded in portraying a believable character. 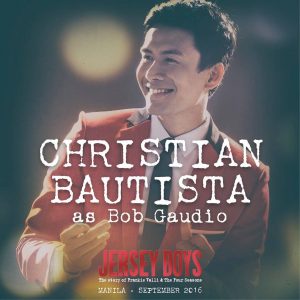 I loved Bob Gaudio’s song “Cry for Me.” So when I learned that Christian Bautista was chosen to play Bob. I immediately imagined him singing that song. (I sung “Don’t go, baby.” in the background because I can’t help it.) Hearing him sing this track at Jersey Boys in Manila itself confirmed my hunch. He really fitted the role. Other than Frankie. Bob is the only character among the members of the Four Seasons with solo performances. He completed the puzzle well in the story. Character-wise, Bautista played his role to display the contrast between Bob and Tommy. DeVito led Four Seasons largely through his cockiness. Bob led them with a business sense fit for a record producer. A youthful role fit for Bautista. 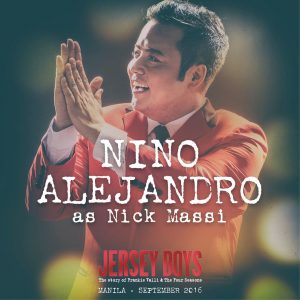 The real mixed feelings came in when the role of Nick Massi was announced to be portrayed by Nino Alejandro. Why? He’s a belter. If you knew him way before he showed up on The Voice PH Season 2’s Blind Auditions, you know he’s a belter. He showed up at the blind auditions belting AC/DC’s “Highway to Hell”. That’s his range. And at Jersey Boys in Manila, he’s playing a baritone? The moment he sung the really low parts of “Sherry” and “Big Girls Don’t Cry.” I was like “He can do it after all.” It doesn’t sound forced. As an actor, he disappeared into the role of Nick well. The moment Nick started ranting about how much of a pig DeVito is, it felt so genuine. Almost “hugot” level. And the fascinating thing about Nick’s characterization? It’s an excellent balance between drama and comedy without trying to be funny. 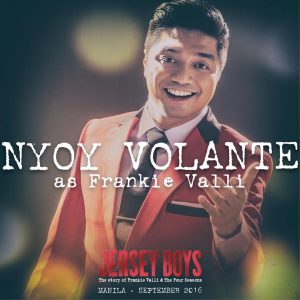 Nyoy Volante getting cast as Frankie Valli at Jersey Boys in Manila is the least surprising thing for me. He can really do falsetto. The pleasant surprise is how dedicated he was to the role. Not only did he alter his singing voice. He altered even his speaking voice. There are some lines where he sounded a little nasal. But it’s a risk you take when you assume the role of one of the prime movers of the falsetto trend in music. He sounded almost unisex. It gave credibility to Bob Crewe’s question on whether the person singing the lead is a girl or a boy. And even in songs like “My Eyes Adored You”, he didn’t break character voice-wise. He’s that good.

Jersey Boys in Manila is still going strong. But it’s running only until 16 October 2016. Buy tickets by clicking here while supplies last. The clip below should convince you enough to think fast and buy tickets quick.

Did you miss our updates? Chances are we’d be coming up for more articles in the following months. Hence, a comeback article about Jersey Boys in Manila. What other musicals are you interested to see? Comments, suggestions and violent reactions are more than welcome on our social media pages. Like us on Facebook. And follow us on Twitter. Thanks for reading.