What if I tell you that once in opera, somebody dared to shock the market and rock everyone on their seats with their revolutionary approach on opera?

I am referring to Richard Strauss and 2 of his operatic masterpieces changed the opera industry forever. And I will discuss one of them here – Richard Strauss’s “Salome”, one of his craziest works. 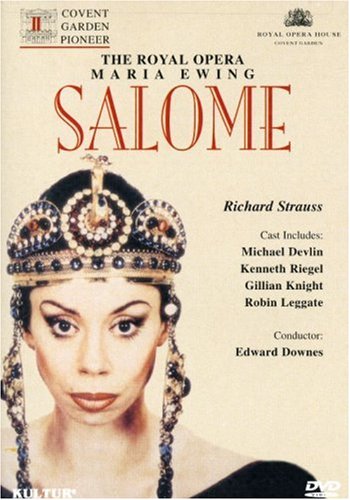 A Diabolical Version of a Biblical Story

Based on a French play written by Oscar Wilde (instead of the Bible since very little is said about her there) you may have heard about the Dance of the Seven Veils. That dance was known to have been popularized by Salome, daughter of Herodias and stepdaughter of Herod that she used to extort the latter into giving her the decapitated head of John the Baptist on a silver platter.

Usually, that dance was performed in previous productions with the soprano playing Salome stripping herself off of all the 7 veils, leaving only some glittering negligee. The version that we will discuss is the version where Maria Ewing willfully agreed to push the limits of the dance and go buff before a live crowd in the Royal Opera House Covent Garden. But was it worth it? 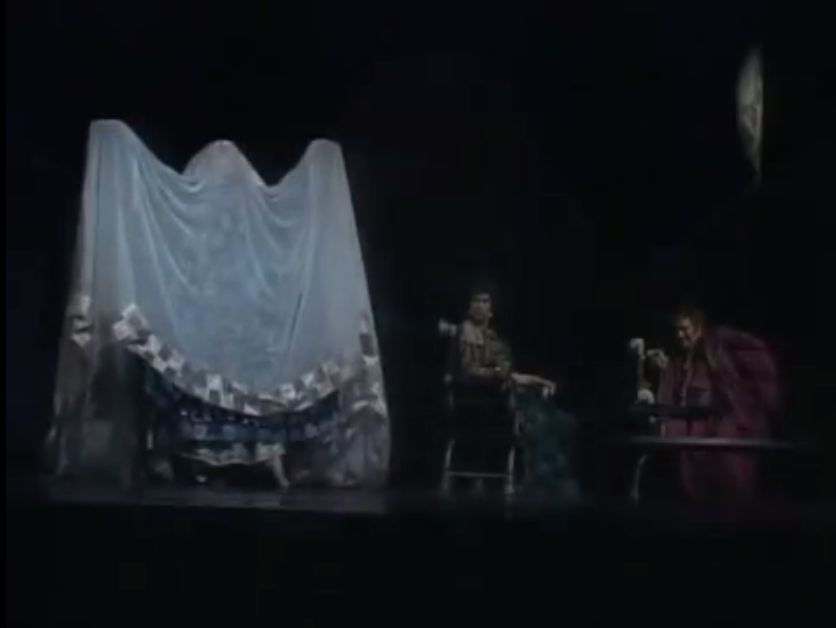 It was in the Bible …

In the Bible, the story focused on how lecherous and vile Herod (played by Kenneth Riegel) was – sleeping with his sister-in-law, Herodias (played by Gillian Knight) and, at the same time, lusting after his niece/stepdaughter, Salome.

How beautiful and talented was Salome to succeed in pressuring Herod into giving her the severed head of John the Baptist (played by Michael Devlin; Jokanaan in the libretto)? It  can’t simply be dancing in front of him in the middle of one of his lavish banquets and then she gets what she wanted? And what could have motivated her to go for it when it is actually Herodias that wanted John the Baptist dead and not Salome? Could she have ulterior motives too? What is the Bible not telling us then? 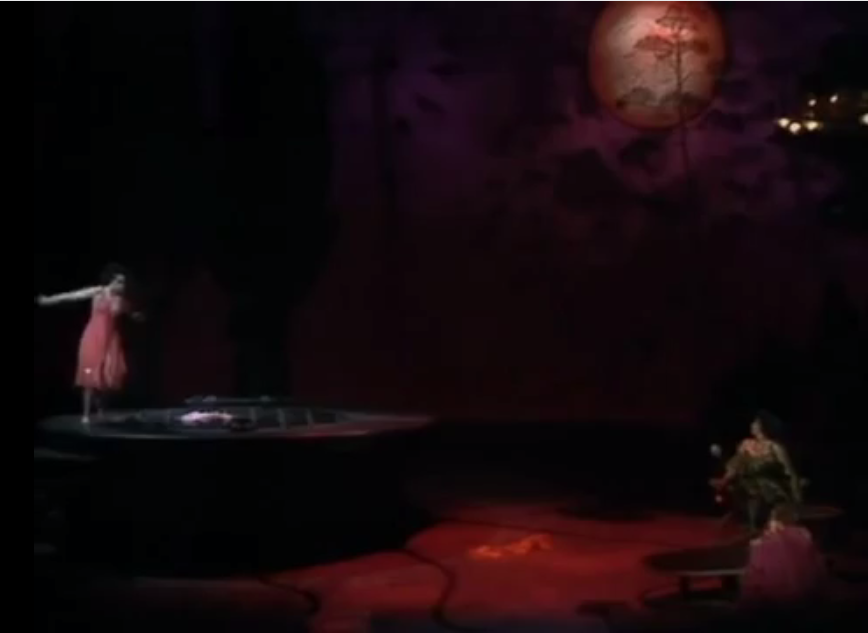 The Dance of the Seven Veils

In this version, the veils become layers of clothing that Salome takes off one by one since this dance is more about skin exposure than actual dancing skill. But the sequence is still the same – 7 pieces of clothing. You then understand the concern that Herodias had over her daughter the moment the latter agreed to dance for Herod. On the other hand, using Herod’s weakness is the only way Salome can get what she wanted – death to the only man who ever rejected her. This is where you realize the depths of malevolence that Salome possesses.

She dances slowly with no shade of flirtation whatsoever. The closest thing she ever got to flirtation is by removing one of the layers of her clothing and waving it on top of the Baptist’s cage. She took some time doing this. No reaction from Baptist. In fact, it’s the rejection that Salome felt from Baptist that spurned her into this scheme. Quite bloody but then again, she thinks herself as one that could get away with anything because she’s the Princess of Judea.

… she did. Devoid of Hollywood special effects, photoshop and whatever special effect you could think of related to nudity are not here. This is the vision of Richard Strauss finally fulfilled (because most sopranos that took over this role would at least leave something on, no matter how thin). Add the lighting effects to spice up the eroticism and the drama and you got yourself a classic.

Herod, perhaps due to his lecherousness, took a long while to realize that the girl he’s been lusting over is actually a monster – one with bloodthirsty tendencies much much worse than her mother. The bloody finale was more like expected since the long aria Salome delivered upon clutching the severed head of Baptist into her hands revealed the twisted reasons behind everything. Another slow burn approach is executed that prepared the audience for the final kill. 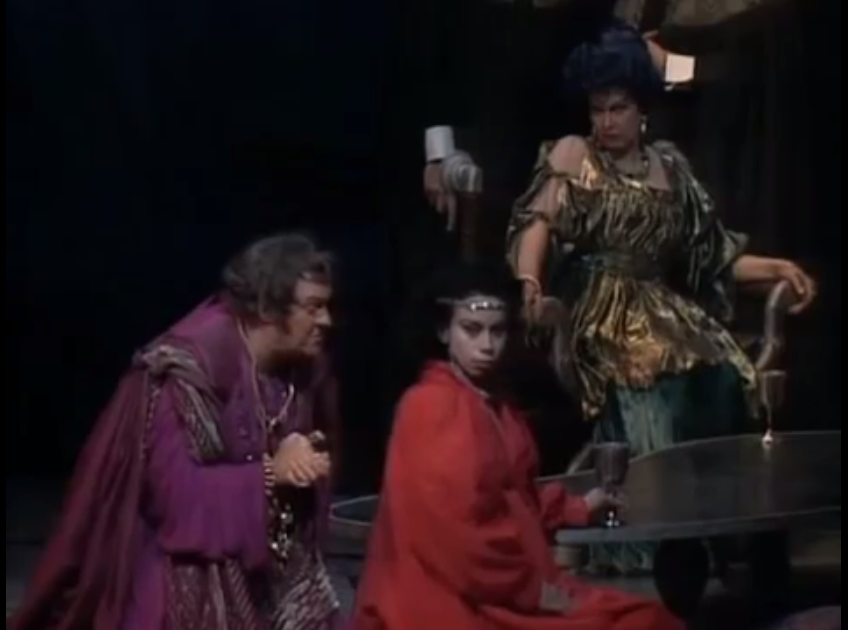 But Still, This is Opera

Coming up with a production this controversial would mean stirring the pot. But it doesn’t mean that the singing and acting demands of the opera would be neglected. And in this manner I can dare say that everyone’s performance in this production is deliciously vicious. 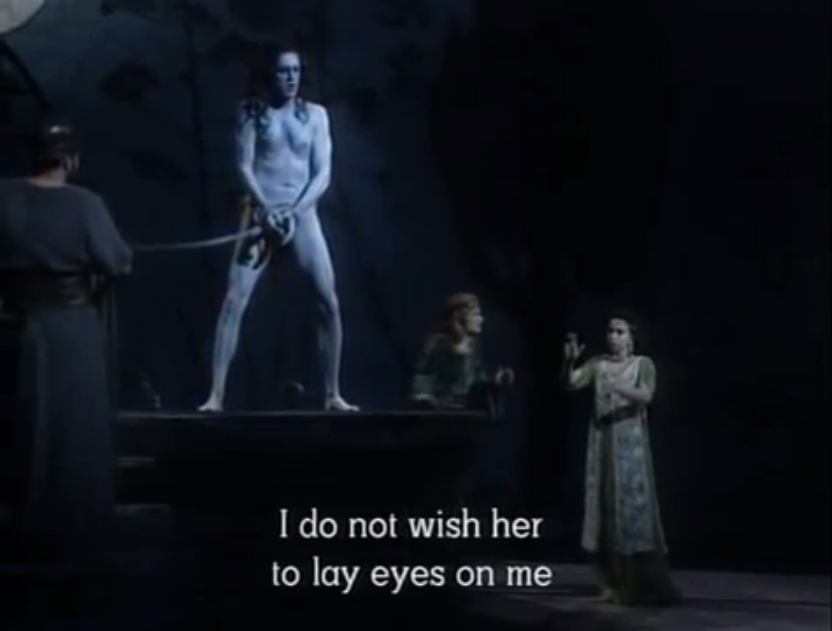 Everything is bleak. The closest that you can get for positive lines are from John the Baptist, played effectively by baritone Michael Devlin. Dressing him in just a small piece of cloth is consistent with how his earliest followers described him in the Bible – preaching around the dessert wearing nothing but animal skin. The animal skin seen here is small enough to condition the audience’s expectation for the nudity to come in the second act. The powdery white makeup may have been an exaggerated comment on how long Baptist had been in his cell but it served its purpose once Salome had to deliver the praises in an effort to win his heart.

Gillian Knight, with her rich mezzo voice and believable acting, gave you the impression that Herodias may have been bipolar. But when you have a desert prophet, a bratty daughter and a lunatic lover as the only things to keep you preoccupied, the victorious joy she expressed much later in the story resonated real well with the lines she sang in the opera. She sounds like a she-demon, an adjective that has been attributed to Herodias several times in the past anyway.

Kenneth Riegel’s sharp tenor voice blended real well with the psychosis, lechery and madness needed for the role of Herod. Apart from singing his lines with vicious rancor and diabolical madness, facial expressions practically made eyes pop out of his head. It’s bordering on chewing the scenery with all the crazy antics that come with playing Herod but in opera, going over-the-top with roles like this is almost the norm. He went over-the-top but that’s a minor side effect to the effective performance elicited in this production. 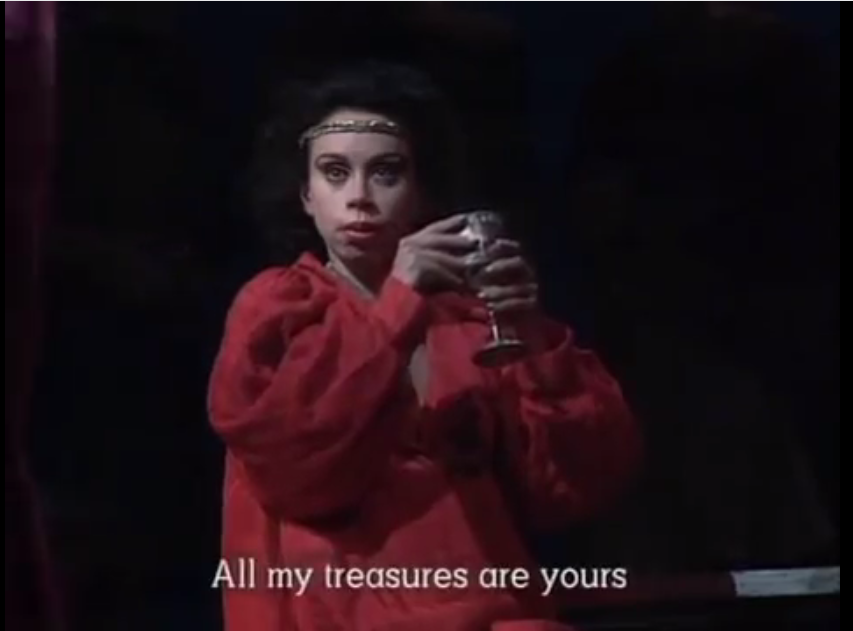 And of course, after seeing Maria Ewing in this splendid magnificent performance, it would be tough for me to find another version to get stuck in my head in a long while.

Surely, most fans would remember the opera “Salome” for the Dance of the Seven Veils. But upon watching this, I realized why some opera fans considered Salome as one of the toughest casting decisions to make. Salome needs to have almost everything – that youthful look that suggested that she may have been a minor, that beauty or charisma that made almost all of the characters be erotically attracted to her, that singing voice that can suggest of her diabolical nature and, of course, that seduction skill. If this is the criteria that some Strauss fans have used to pick their next Salome, then Ewing passes all of them with flying colors.

Acting the part of Salome is not just about going risque and taking it all off. Once the public have seen all of you, what else is left for you to offer? So it can be challenging to keep the audience’s attention stay put after that dance. Ewing’s singing that transformed her from a demanding brat to a twisted soul really sealed the deal. She is Salome from the first minutes that she appeared on stage until that kiss on the severed head. Compared to Riegel, Ewing never went over the top. In fact, her stoic facial expression rarely changed even when dancing not that it affected the performance. And it suited her role as a princess stoned to silence after her first taste at rejection. And for a role that suggested Salome’s origins, Ewing’s beauty fitted more the Middle Eastern type of beauty.

Of course, you can own a DVD copy of this instant classic right in the comfort of your favorite player since it’s now available on Amazon. You can simply click here to get your own copy and relive the madness. And while you’re at it, might as well like our Facebook page, MusicalsOnline.com and follow us on Twitter @musicalsnews. Thanks for reading.