Sex is in the Heel Lyrics: Kinky Boots The Musical 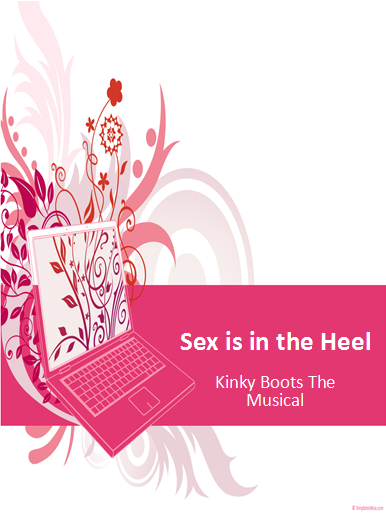 Sex is in the Heel. Does this analogy sound familiar to you? If it is, I would start thinking that you watch Sex and the City. Oh the fascination with Manolo Blahnik! Who would have thought that a brainstorming session regarding footwear would be the contents of this hit song from Kinky Boots The Musical? 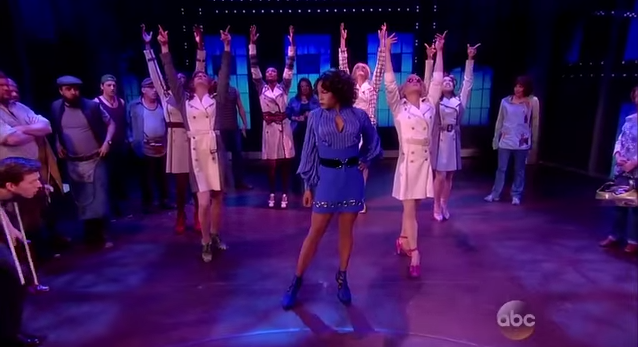 For starters, Kinky Boots The Musical is about the partnership forged between Charlie Price and Lola. Charlie needed to maintain the shoe factory he inherited from his father. Lola needed a supplier of boots for himself and his fellow drag performers. The brainstorming process led to Lola explaining to Charlie the importance of high heels. Since he’s not the type that beats around the bush, he bluntly told Charlie “Sex is in the heel”. 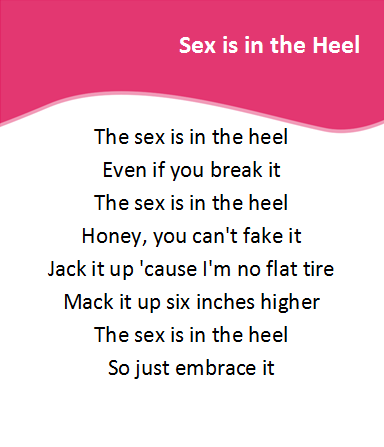 Elevating the heels meant meeting the needs of the niche market Charlie is rooting for. “Mack it up six inches higher” Sounds intimidating for folks not attuned to wearing high heels. But very common for performers like Lola and her Angels. Charlie is willing to make boots so big that it reaches above the knee. But for Lola, heels should be revamped too. In the song Sex is in the Heel, he expressed best why heels are essential to performance. The sex is not literal of course. But their performances have that subliminal sensuality to it. 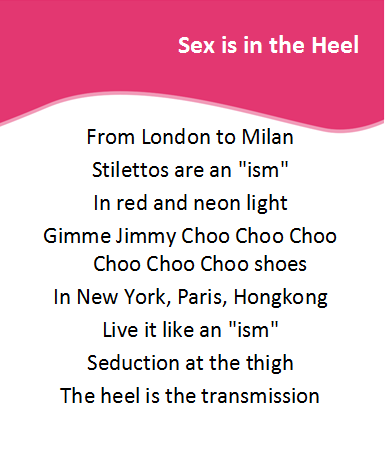 The lyrics here matched the runway vibe to Sex is in the Heel. If a song is going to present an industry that embraces the latest trends, might as well match it with trendy tunes. With beats blurring the lines between disco funk and techno without going too fast with the tempo, mentioning the fashion hot spots is inevitable. “Seduction at the thigh” – this line confirms the importance of having boots that are so big and so elevated. 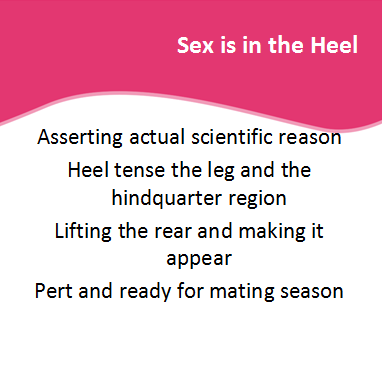 “Lifting the rear and making it appear pert and ready for mating season” It is a nerdy way to describe the effect high heels have on your heels. It climbs up the ass without effing it. In some cases, it creates the illusion of a bigger butt. In reality, the wearer just found a sexier way to walk. It slightly protrudes the butt and makes the wearer strut better. The choreography applied in Sex is in the Heel just pushed the idea further. 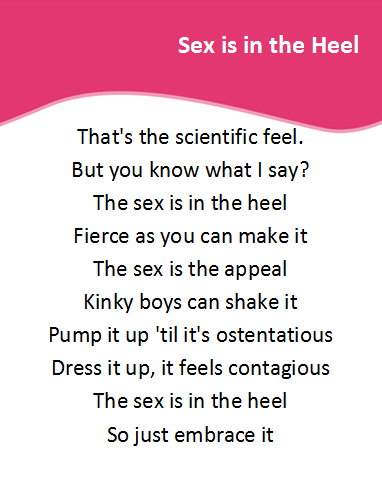 “Fierce!” Ever since Tyra Banks popularized that term, almost every fashion-conscious individual has applied this term on their over-all look. Think of it as the opposite of dainty. It displayed the main difference between Lola and the rest of the women working in the shoe factory. “Fierce as you can make it” because such attitudes fitted well in the performing industry too. Sex is in the Heel meant performance levels extended to their wardrobe. Boots included. 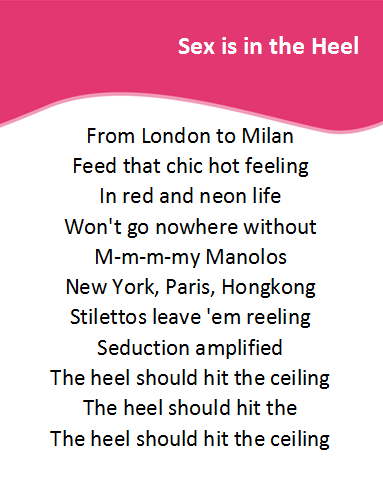 With kick-ass choreography displayed here at Kinky Boots The Musical, Lola included among the instructions “The heel should hit the ceiling”. Angels kick high so should their boots. Again, another emphasis here at Sex is in the Heel about how even boots add pizzazz to the overall performance. When performers produce electrifying acts, the look should fit their energy. Obviously from head to toe. 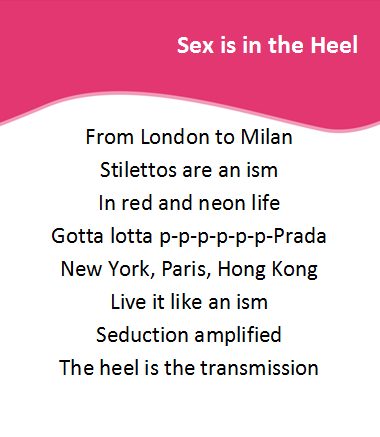 Mentioning the labels is inevitable. Some musicals allow it. And the fashion lovers can relate better. So hearing Sex is in the Heel alone gets you thinking that their niche is the fashionista fan base that enjoys musicals too. Describing the parameters needed on the boots to be manufactured in the story are not enough. If they have to mention Manolo, Jimmy and Prada to get the point across, they would. This is where the brilliance in the lyrics arose. 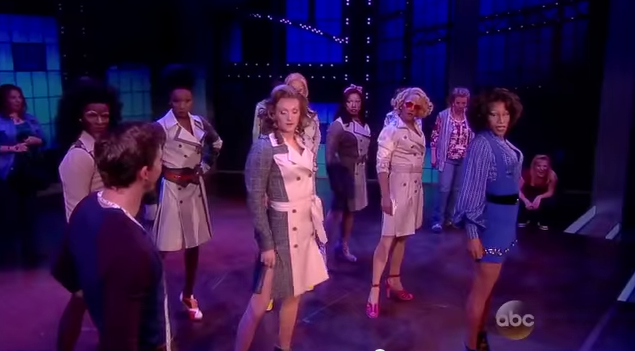 Want to go all the way from here? Surely sex is in the heel. But you can make it a fling. Who knows how long it will take before it gets serious? Click here or on the image below for tickets. You might see your home city in the tour itinerary. 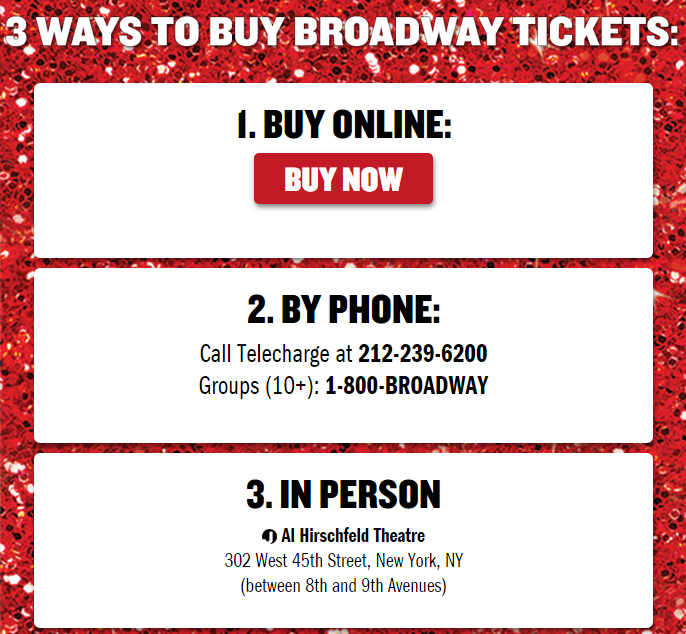 Surely there are more musicals for us to tackle. Knowing you can never get enough of them, might as well subscribe to our online newsletter. Like our official Facebook page, Musicals Online, and follow us on @Twitter. Get updates on the latest articles real-time. We would appreciate it very much if you do. Thanks for reading.