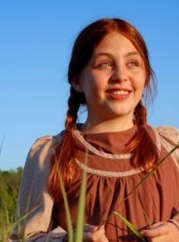 For those looking for new musicals here goes a new adventure!
Book, Music, and Lyrics by Susan C. Hunter and Tom Shelton
Based on the book by Carol Ryrie Brink

“As cream rises to the top, so did Caddie Woodlawn… – Wisconsin News-Leader
“Young audiences adore Caddie Woodlawn!” –Springfield News-Leader
Carol Ryrie Brink’s Newbery Award-winning novel Caddie Woodlawn is brought to exuberant life as a musical. Caddie – the iconic, high-spirited Wisconsin pioneer girl beloved by generations of readers – learns invaluable lessons about reconciling the head-strong child she’s been, and the responsible adult she is soon to be.
If you feel like reading the music in scores just write to  caddiewoodlawnmusical@gmail.com 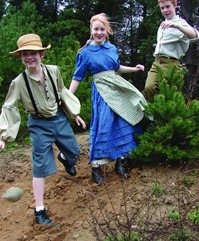 Perhaps you prefer listening to some tracks to get familiar or even buy your favorite song or the whole album. Well that’s very easy… The music is available at CD Baby, the independent music distributor.

In 1935 Carol Ryrie Brink wrote the Newbery-award winning novel, CADDIE WOODLAWN, based on the childhood of her grandmother, Caroline Woodhouse. She had collected the stories that her grandmother had often recounted of her adventures as a pioneer child settling the wilderness of Wisconsin in the mid 1800’s. 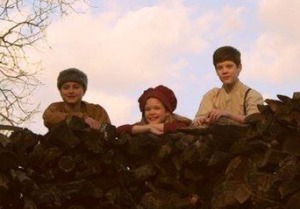 More than seventy years later, CADDIE WOODLAWN has been brought to the stage in an exuberant musical written by Susan C. Hunter and Tom Shelton. This adaptation had its world premiere at the Landers Theatre in Springfield, Missouri, having been selected as the winner of a nationwide play writing contest. It opened to critical acclaim and was enthusiastically received by Springfield audiences.

The musical has gone on to be produced all over the country, most recently in Caddie’s home town of Menomonie, Wisconsin at the Historic Mabel Tainter Theatre.

At the core of CADDIE WOODLAWN’s success is a plot that emphasizes the high spirited antics of three pioneer children, but never forgets the strong family values that link one generation to another.

Caddie Woodlawn is a musical adaptation of the book of the same name by Carol Ryrie Brink, published by Samuel French. The book won the Newbery Award for Excellence in Children’s Literature in 1938, has never been out of print, and is a perennial favorite on middle-school reading lists across the country.The story is based on the real-life adventures of the Woodlawn family, pioneer settlers of northwestern Wisconsin in the mid-nineteenth century. Caddie, the headstrong middle daughter, is a twelve-year-old with a predilection for adventure both exciting and sometimes dangerous. Her thrill-seeking turns to heroism when she single-handedly averts a bloody confrontation between the white settlers and the nearby Dakotas by riding through the night to warn the tribe.

Since then Caddie Woodlawn has enjoyed productions at First Stage Milwaukee, a leading professional children’s theater company; numerous community and school productions nationwide, and most recently at the Mabel Tainter Theater in Menomonie, Wisconsin. This last was notable for being the first production in the actual region where the story takes place. There is discussion of making the musical a semi-annual event in Menomonie.

Rights are held by the Samuel French company.