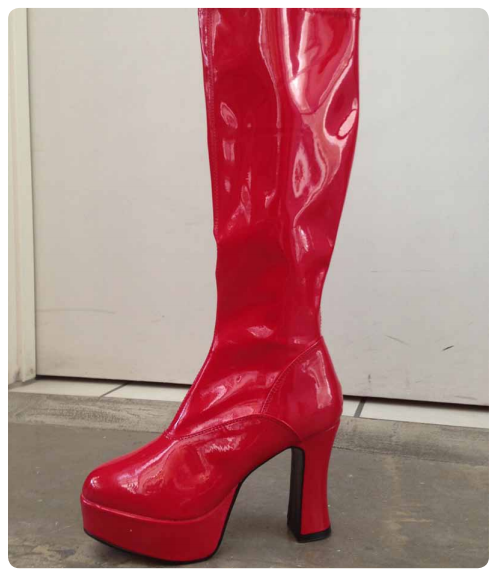 Based on a true story, “Kinky Boots The Musical” is about an heir to an ailing shoe factory and the cabaret performer that helped him turn the business around. As they say in marketing, it’s about meeting the market’s need as a business person since they create the demand. Hard work reciprocated, demand met and everyone wins.

Parker was one of the recurring cast members of the latest “Kinky Boots The Musical” so he already knew how to strut those heels to the tune of upbeat music. Previous theater projects include “I Left My Heart”, “Hair”, and “In The Heights”. Other details about his professional and personal life are found at his website and his Twitter account.

Prior to his Broadway debut, he was part of the national touring casts of “Mamma Mia”, “Dreamgirls” and “Jesus Christ Superstar”. Off Broadway, he was cast in “For Lovers Only”. At the regional theater level, he played Matt in “The Fantasticks” (Arena Stage), Jaguar in “Thunder Knocking” (Cincinnati Playhouse) and Junie in “The Colored Museum”  (Crossroads Theater, Alabama State University)

Kelso is also a returning cast member here at “Kinky Boots The Musical” except that this time he will be playing the role of the shoe factory owner, Charlie. His other high profile role was Fiyero in the national touring cast of “Wicked”. Regional theater credentials mentioned him getting included in the casts of “Rent”, “Two Rooms”, “Jacques Brel”, “The Drawer Boy” and “Fiddler on the Roof”. Production dates and theaters were he performed can be found on his official website.

An honorary degree holder from the Liverpool Institute for the Performing Arts, Jeanna de Waal’s curriculum vitae in theater is already colorful prior to getting cast as Lauren in “Kinky Boots The Musical”. From Broadway to the West End, her repertoire includes “American Idiot”, “Carrie”, “We Will Rock You”, “Wicked” (Glinda) and “Rocky Horror” (Janet).

For a role based on the stereotype image of a person having issues with the openly gay guys, Sherman is faced with the challenge of making Don look more human and less of a caricature. Checking the previous projects where he got cast showed a nice balance between theater, film and TV. Television viewers may have seen him on “Law and Order”, “Life on Mars”, “Rubicon”, “Justified”, “Mercy”, “The Good Wife” and “Gun Hill”. Broadway regulars may have seen him though on “The Full Monty”, “Henry IV”, “A Touch of the Poet”, “Cyrano de Bergerac” and “Desire Under the Elms”.

From being an understudy to participating in readings, Wolfson managed to secure her place now that she got cast in “Kinky Boots The Musical” as Nicola. On Broadway, she was the understudy both for the roles of Wednesday (Addams Family) and Les Miserables revival (Eponine). She played the role of Wednesday on the Addams Family national tour and got cast in “Legally Blonde” for the characters of Serena and Brooke Wyndham respectively. The NYC readings of “Kinky Boots The Musical” helped in getting a part in the current production obviously. Details regarding her professional theater life are on her website.

Previously seen in the Tony Award-winning straight play “All The Way”, he now joins the cast of “Kinky Boots The Musical” as the traditionalist factory worker, George. And he has had his share of national touring cast exposure like his stints with “Spamalot” and “Memphis”. At the regional theater circuit, he got cast in “Twelve Angry Men”, “The Lion in Winter, “The Who’s Tommy” and “Copenhagen 1776”.

“Kinky Boots The Musical” is his Broadway debut.

Debuting on Broadway, he was previously seen in “Good Hair”. Other credentials include winning Apollo Theater’s “Star of Tomorrow” and “Amateur Night”.

Just like Baldeo, Colley is debuting in Broadway through “Kinky Boots The Musical”

Prior to his own Broadway debut, he was cast in productions held on Stage Center (Ragtime) and Shreveport Little Theater (To Kill A Mockingbird)

Tickets are still up for grabs knowing that “Kinky Boots The Musical” starts its run on March 7, 2015 at the Al Hirschfeld Theatre. Online tickets may be purchased through Telecharge.com. Buy tickets directly from them while stocks still last just by calling them up at 212-239-6200. You can also drop by their box office too in this address:

It’s a kid-friendly show with kids aged 4 and above allowed to see “Kinky Boots The Musical”. Updates would be posted here as well regarding the tour and other information related to this hit musical. All you need to do for the updates to keep coming is by liking our official Facebook page, MusicalsOnline.com, and following us on Twitter @musicalsnews. Thanks for reading.