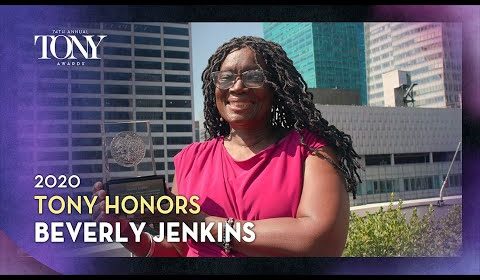 A Production Stage Manager of remarkable distinction who is esteemed equally for her work on shows, and for the wisdom and empathy Beverly Jenkins shares widely throughout the Broadway community.

—About Beverly Jenkins—
Beverly Jenkins has been a professional stage manager for over 30 years. She is currently the production stage manager for the TONY Award winning Best Musical Hadestown. A graduate of Howard University, Ms. Jenkins got her start on Broadway as the production assistant on Five Guys Named Moe and eventually became the assistant stage manager. She has since managed many Broadway shows; her credits include A Bronx Tale: The Musical, Fully Committed, Amazing Grace, Living On Love, Holler If Ya Hear Me, Machinal, Godspell, Bengal Tiger at the Baghdad Zoo, In the Heights, Shrek: The Musical, Avenue Q, Aida, Sweet Charity, Oklahoma!, The Lion King, Bring In Da Noise/Bring In Da Funk, and Miss Saigon, along with numerous other productions. She has worked with Roundabout Theatre Company on Bad Jews and If There Is I Haven’t Found It Yet and at Paper Mill Playhouse for the regional run of A Bronx Tale. During her career in theatre management, Ms. Jenkins has been production supervisor for Summer: The Donna Summer Musical and A Bronx Tale, company manager at The Negro Ensemble Company, and executive assistant at Frank Silvera Writers’ Workshop. When she served as producer for the AUDELCO Awards, she had the pleasure of working closely with the organization’s founder, Vivian E. Robinson. She toured Europe with Jubilation! Dance Company and has managed numerous special events and benefits. Beverly has served as executive director of the Black Rock Coalition and has taught at several universities including NYU Tisch School of the Arts and Shenandoah Conservatory at Shenandoah University and has been a lecturer at the Yale School of Drama. Ms. Jenkins is on the board of trustees of Broadway Cares/Equity Fights Aids. As a personal manager, she spearheaded the career of musician Meshell Ndegeocello and in her work with the Black Rock Coalition, partnered with producers in Italy to bring the first Black Rock Festival to the city of Bari.