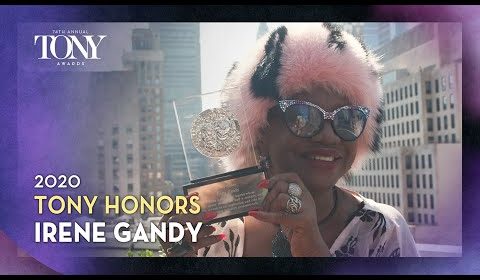 Saluting a theatrical legend whose career spans more than half a century, and who has served as an inspiration and role model to countless industry professionals.

—About Irene Gandy—
Irene Gandy is the only Black female press agent member of ATPAM (Association of Theatrical Press Agents and Managers) for over 50 years. Working with Producer Jeffrey Richards for over 3 decades, she is a Tony-Award winning producer on Broadway for The Gershwin’s’ Porgy and Bess and was a producer for Lady Day At Emerson Bar and Grill starring Audra MacDonald. She was also co-producer with Voza Rivers of the National tour of South-African musical Sarafina. In 2008, she became the first female press agent to be immortalized with a Sardis caricature. A fashionista known for her furs, in 2015 she launched a signature collection featured in Vogue Magazine and will debut a Lady Irene Fur line in 2022. Gandy’s recent productions include The Great Society, American Son, China Doll, Fiddler on the Roof ,You Can’t Take It With You, Gandy began her career in 1968 as a publicist with Douglas Turner Ward and Robert Hooks’ Negro Ensemble Company. Since then, she has worked on over 100 Broadway shows including, August Osage County, Glengarry Glen Ross, Radio Golf, Bubbling Brown Sugar, Smokey Joe’s Cafe, Lena Horne: The Lady and her Music, and The Wiz. In addition to her work in theatre, she was Associate Director of Special Markets for CBS Records, working with such artists as Earth, Wind and Fire, The Jacksons, Labelle, , her personal music clients include Freddie Jackson and Nona Hendryx,. Gandy is the Press Consultant for Harlem Week, recipient of the 1997 National Action Network’s “Woman of Excellence Award” the 2007 Vanguard Award from Black to Broadway Productions, the 2004 Black Public Relations Society Award, 2013 “Inspire in New York” Award, 2015 Pioneer Award for BLACK PRIDE NYC and the 2015 Café Mocha “Salute Her” “Media Legend Award.” In 2017, Other Awards "Project 1 Voice Lifetime Achievement" for outstanding achievements and vision to artistic excellence in the American Theater; "HARLEM WEEK Vivian Robinson Arts and Culture; and "Life Changers" presented by WNBA players Teresa Weatherspoon and Rita Haywood for inspiring, transforming, and empowering others. In 2018 she was honored with Vivian Robinson/AUDELCO "Pioneer Award" for Recognition Awards for Excellence in Black Theatre. In 2019 she was honored with the NAACP-LGBQT David Weaver Prize for Excellence in the Arts. 2020 Gandy was inducted into New York Public Lincoln Center Performing Arts Library as part of The League of Professional Theatre Women’s Oral History Project. Currently serves on the boards of City College for the Arts, HARLEM WEEK and New Heritage Theater.