Brace Yourselves: The Marco Polo Rerun is Coming

It seems like yesterday when I watched the premiere of the Filipino-penned musical “Marco Polo: An Untold Love Story”. A family friendly musical that reminded me of the music-laced films I have witnessed as a kid and gave birth to the “Disney-fication” of children’s entertainment. I mean that in a good way. 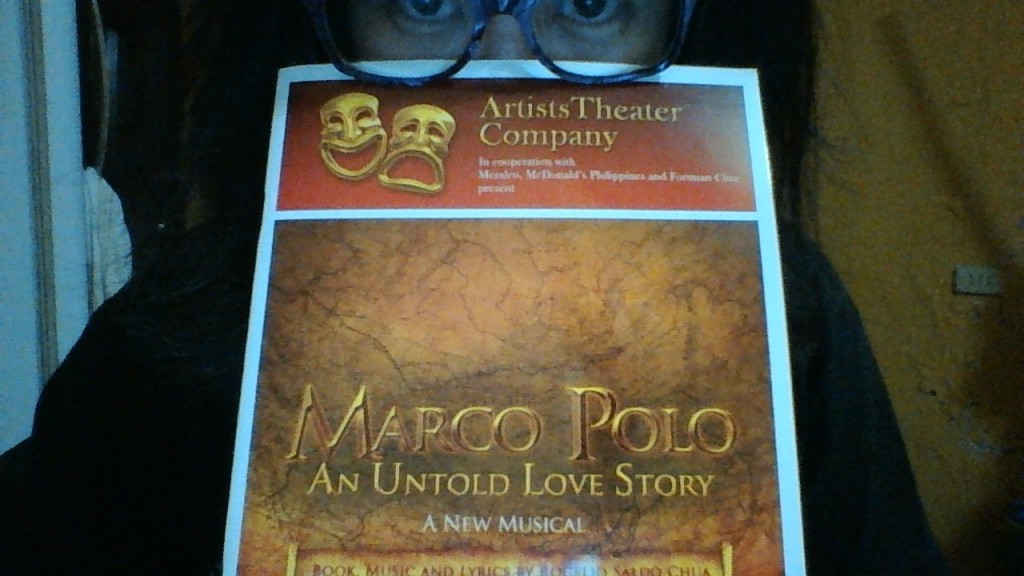 Proof that I was there

Expectations are high and I am excited knowing how this would be the first Filipino musical that I would be witnessing live. It reminded me of the day I wrote several articles about it on my other page. I feel bad that it has gone inactive ever since I went full-time as a home-based writer. But then again, I gotta eat.

This doesn’t mean I don’t have time to plug and reminisce that night that I belonged to a crowd that witnessed first-hand a musical that we can call our own. I felt so happy that I ended up writing 3 articles about it (with one article ending up as a fan-girling opportunity for me to write about Stephanie Reese).

[Note: I already saw Stephanie Reese in another occasion. I still feel too inferior to say “Hi”. On what occasion that is, I’ll share it another time. Promise, I’m not her stalker. Hi, Ms. Stephanie, I love you. I hope I don’t creep you out.]

I ended up reading my old Marco Polo articles again and I must say I still agree with most that is said there. This is where I shared most of my thoughts about the musical itself. And I hold the distinction of being the only writer here so far that is not included in the musical (I’m not bitter). Read the excerpts from the article originally published here (because I just realized that my article spanned beyond 2000 words):

I know the nationalist in me would flare up once again in a good way knowing that while it almost became a trend to import Broadway musicals, Artists Theater Company took the initiative to start exporting a musical in order to bring in the total package – we need to start writing and producing our own musicals, not just the talents. We often took pride in the fact that Filipinos often bag major roles in international musicals. Can’t we write our own destiny?

To rephrase a line from Marco Polo The Musical itself, “We do not write our own destiny” but with the way things turned out for most of the characters after watching this production, it’s like the characters themselves found a way around it.

I agreed to watch the musical with an open mind and lax reference to history. The beauty about watching productions with the historical fiction genre is that you get to play around the speculations that rose to the surface at the time that historical events occurred. Besides, history is often written in the point of view of the victors so that alone should give you reason to question more.

What if Marco Polo (played by David Bianco) indeed fell in love with Kublai Khan’s daughter, Kogajin (played by Stephanie Reese)? Will it matter? Does it change anything?

It’s easy to understand the intriguing premise that this musical offers since much of what is written about Marco Polo’s life is based on how he narrated his life to Rustigielo of Pisa (played by Chinggoy Alonzo). Once some historical accounts get so much contention in terms of historical accuracy, you’ve got some stories written in your head. Turn it into a script, add in music and hire some actors and you’ve got a musical rough draft. (It’s just speculation on my head on how a musical is conceptualized. I’ve never written a musical myself and never got past fan fiction phase so please don’t take my word for it) 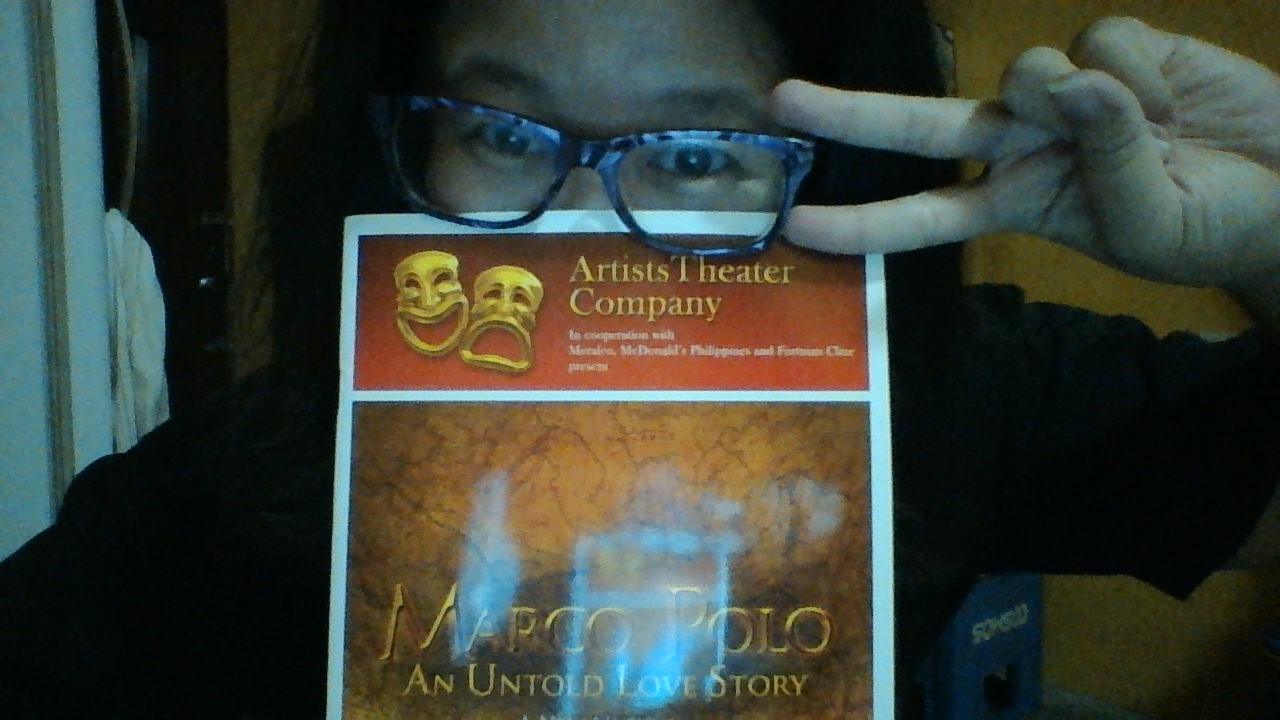 Watching Chinggoy Alonzo at Marco Polo The Musical made me a fan and realized how theater suited him well and how most roles he played on primetime soaps barely scratched the surface on the kind of talent he can exude in theater (News Flash: Most theater professionals get criminally underused in primetime soaps in favor of “homegrown talents”). Playing the narrator, Rustigielo of Piza, has its perks including the opportunity to portray multiple roles as a guarantee of his promise in the prologue that he will be with the audience “every step of the way”. And he can change his voice and accent depending on the role assumed at the time all in the same night. If that hasn’t impressed you yet, go rewatch it
Kuya Manzano is playing the villain …. again. Not that I am sick of it but it must have been because of his strong facial features and sinister smize (a term coined from ANTM meaning “smile with your eyes”) that often get him placed in roles like these. And yes, he can flash that kind of smile that gives you the initial impression that this man is the spawn of the Devil and is never apologetic for it. While almost every actor wanted to be a star, when the need for someone to play the bad guy arises, Kuya Manzano rises to the occasion.
Pinky Marquez made me like Empress Wu as one of my fave characters in Marco Polo The Musical. As a mother, she doesn’t smother to think that the character is the direct descendant (or so the story told) of the Chinese monarchs. It’s a refreshing take on the Chinese motherly image instead of the conventional character seen in the Mano Po franchise or soaps that portrayed Chinese mothers are ridiculously strict on their children. (Media has its not-so-subtle way of presenting stereotypes) Empress Wu is the kind of mother that will not stop you from following your heart but in the subliminal tradition of mothers playing a guilt-trip on their children, she used her own aborted love affair as a reminder to them that more often than not, we don’t write our own destiny. Apart from her being still an amazing theater actress, the little things that she did make her look very motherly in a touching way.
I feel stupid that I only know about Stephanie Reese through Marco Polo The Musical. I was imploding inside every time I see her onstage and switch from a feminist princess commander to a lovestruck princess. It’s the passive kind of flirting. If ever there is one performer here that exuded the aspect of physical acting best here, it’s Stephanie Reese. You stare at her not because you’re interested to hear what she wanted to say but you want to read the body movements that betray the things that she is saying. It’s amazing how she can be so transparent without playing the “pakipot” card in courtship.
And of course, the title role, Marco Polo himself. Not familiar as well with David Bianco and he exuded the youthful vibe of Marco Polo, a trait that usually comes with optimist whatever the age they may be. His singing voice reminded me of Disney princes. It helped a lot that he can sing well and knew the kind of emotions to infuse into the songs based on the scene that requires it.

So are we expecting anything new in this rerun? Well, while several original cast members will be returning, this time it will be a different Marco Polo in the person of Jonathan Wagner (due to opera binge-ing, what came out of my mouth was /vag-nehr/ instead of /wag-ner/).

He looks promising although I have yet to hear more from him. Besides, when I made some Marco Polo memes last February to help promote the musical, I used a sketch drawing of the real Marco Polo.
I know the grammar is bad but maybe you found the lyrics familiar. I was still testing my internet marketing skills then and I’ve been told about the memory-enhancing power of memes hence this test drive. For a complete set of Marco Polo-related memes I made, you can view them here at my business pet project slash Facebook page – Purple Thunder Solutions (in the tradition of shameless plugging, please like my page). In case Facebook is down, you can view (and continuously plug) Marco Polo by sharing the pins from my Pinterest board.